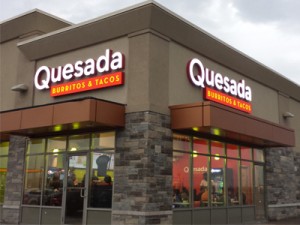 Steve Gill, a computer programming graduate from the University of Toronto (U of T), was working as a software consultant in the U.S. when he fell in love with Mexican food. Although he had no food-service training, he returned to Toronto in 2004 and opened his first Quesada Mexican Grill restaurant, to great success. Later, his brother Greg joined as partner and they opened two more locations.

In 2009, they met Tom O’Neill, who had developed Subway in 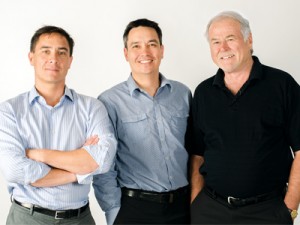 Toronto as an agent and owner, and they agreed to work together to expand Quesada across Canada. With O’Neill as president, Steve as CEO and Greg as COO, they opened two more corporate-run restaurants and began franchising in earnest in 2010. They have since awarded eight development contracts for 240 restaurants, awarded 60 franchise agreements and expect to have 70 restaurants (up from the current 35) operating by July 2015.

Quesada’s success is due in part to the public’s evolving palate for the complex flavour profile of authentic Mexican-style burritos, quesadillas and tacos. For franchisees, the attraction also lies in the low cost of entry and ease of operation. With his IT background, Gill has developed a proprietary point-of-sale (POS) system to offer real-time information for franchisees. The franchisor makes no mark-up on the restaurants’ equipment, food supplies or building materials.

“We are taking a long-term view and keeping the investment and operating costs down for franchisees,” says O’Neill. “Our philosophy is that profitable franchisees will buy more franchises.”

This philosophy has paid off through the area developers, who find qualified franchisees, choose locations, facilitate openings and provide ongoing consulting services.

“Tom is very experienced in lease negotiation,” says Bhavesh Gandhi, who is developing franchises in London, Ont. “He’s more knowledgeable than a real estate broker. We have signed three leases together and gotten the maximum benefits from the landlord.”

Once a restaurant is open, Gandhi credits ongoing business success to the product quality. 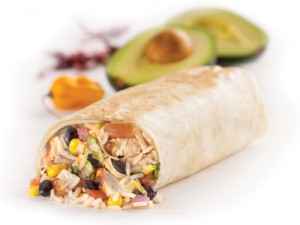 “I chose Quesada over other brands because the food was fresh, healthy and flavourful,” he explains. “I was nervous about the initial turnout, as there were no burrito places in London, but on the first day, there were continuous lineups out the door, without any promotion. People loved the food so much, they were calling their friends and families from the restaurant, telling them to try it themselves. Greg spent five days, from open to close, providing moral support and building our courage to face this influx of customers.”

“Steve was personally serving soft drinks to customers standing in line during my store’s grand opening,” says Jigar Patel, a franchisee in Oakville, Ont. “The area developer was also there to provide support.”

“The company was there for me when I took over my location,” says Tony Ruberto, a franchisee in Mississauga, Ont., who intends to open more Quesada restaurants in the future. “The training was 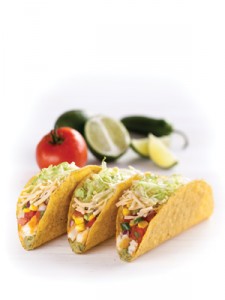 comprehensive and didn’t end with the pre-opening phase. The support materials online are really helpful for when I want to train my staff.”

“People have become more adventurous about food, but are sticking with healthy choices,” says Swapan Randhawa, a franchisee in Brockville, Ont. “They have responded really well to our food. They are amazed by the choices we offer and our freshmade salsa and guacamole.”

“Most people expect fast food to be prepackaged and frozen,” says Stephane Charbonneau, area developer for Eastern and Northern Ontario. “This is comfort food cooked in a small kitchen using natural ingredients. The days of unhealthy, grease-laden offerings are numbered.”

“We are with the right brand at the right time,” says Gary Gandhi, co-franchisee with Nick Pandya in Vaughan, Ont., “and as we open more and more stores, the brand will gain broader recognition.”

All information listed in this section was submitted by Quesada.
Kenilworth Media Inc. cannot assume responsibility for errors of relevance, fact or omission.
The publisher does not endorse any products featured in this article.